Chapter 9 Tomorrow Never Knows: Why and How Uncertainty Matters in Intertemporal Choice

In the world of email, texting, and other messenger software, we are often waiting for a response from someone else. In fact, in many of these cases we face an intertemporal choice: do we bug the other person for what would probably be a quick answer now or do we wait for them to respond on their own and provide a well thought out answer. What should you do? It turns out, what you should do depends on your beliefs about when the answers will arrive.

Try this situation out below.

This element demonstrates the uncertainty we all face in waiting for rewards to come and this uncertainty can often create a dilemma where one has to choose between the smaller, sooner reward as opposed to waiting for the larger, later reward. In this case, you were patient and elected to wait seconds for both answers (i.e., the larger reward)you were not patient and chose to get a single answer (i.e., the smaller reward). For your information, if you would have waited seconds you would have gotten both answers and known which answer was to which question.

Often, like when we send an email, we don't know when the response will happen and we are always tempted to take the smaller-sooner reward. But, it is not always the case that one should wait for the larger, later reward. It turns out whether one should take the smaller-sooner-option depends on the beliefs one has about the distribution of the wait times. As we discussed in the chapter, if the distribution of wait times is believed to be normally distributed (see the blue line if the Figure to the left), then as you wait longer up to a point the predicted wait time for the larger reward will decrease.

In other cases, you might have different beliefs. You might believe that your best chance is for an immediate response but also a chance for a very long delay. A distribution like this is shown in red and it is known as a Pareto distribution. In this case, the longer you wait the predicted wait time will increase. Thus, in this case, it can be reasonable to take the smaller-sooner option.

In fact, in this simulation, you could have had either distribution. Both distributions were set to have the same median wait time of 30 seconds, but other than that have quite different properties. You actually had a Normal distribution.

For more information on this aspect of uncertainty in intertemporal choices see Chapter 9. See also this paper by McGuire & Kable (2013). 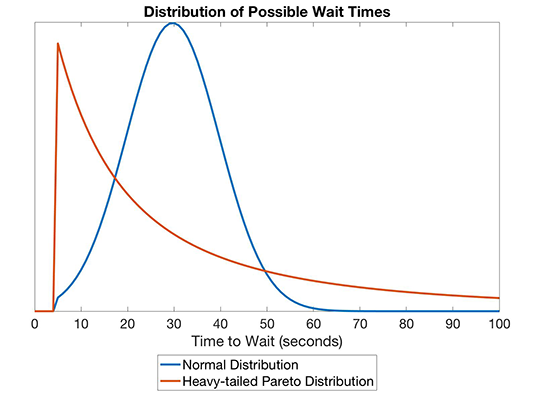 This element demonstrated the different effects uncertainty can have on the intertemporal choices people make. In this case, the beliefs people have on when a payoff will be delivered can and should influence the degree of patience people exhibit when making intertemporal choices.

You have earned a badge! Click me to read more.


Click on any reward badge in the footer to review take home messages of this or other elements.